Use the right tool for the job

In my last post I introduced the jointer, an essential tool for any serious woodworker. Like woodworking, writing has its own core tools, and without them it’s quite difficult to approach the craft seriously. Ideas, passion, and effort will carry you a long way. But when that long way stops dead in a 35,000 word corner that you just can’t get out of…well, let’s look at the tools you were using. And what you were using them for.

A jointer is not a planer, nor vice versa

Though both machines use the same basic assembly (a rotating cutterhead) to perform their functions, the results could not be any more different than if you used a butterknife instead of a paint brush to redecorate.

A closeup of the jointer’s cutterhead. Notice the level plane created by the table to either side of the cutting gap.

A jointer’s cut will be square across the surface of a board because the cutterhead references the plane created by the jointer table. 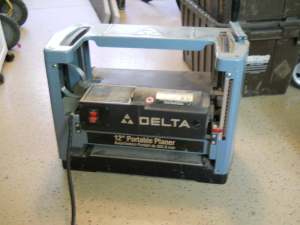 My planer with the cutterhead lowered all the way.

A planer, on the other hand, can only ever duplicate the opposite surface of any board passed under its cutterhead.

Using the wrong tool for the job, in this case, can turn a project into a nightmare. It ain’t much different with writing.

Writing with the right tools

“Get your tenses right.” – Ford Prefect

“Show, don’t tell” is perhaps the most consistently given piece of writing advice. There’s a good reason for that. We don’t pick up stories so we can be told what happens. We pick them up so we can escape into what is happening. It’s a case of temporal states.

When being told a story (as we read it), we are sitting still. Whatever the story is about, we’re getting a taste of it after the fact. But when we’re shown what is happening, we are living the story as we read.

There’s value and need for both showing (describing action, dialogue, character behavior and attitude) and telling (describing past events, flashbacks, internal thought). Both tools are essential to the writing craft.

The protagonist is in the middle of a scene, maybe a dialogue, and then she suddenly starts remembering this, that, or the other thing that happened that one time and that informed the way our protagonist is handling the current situation and that we know, we just know, the writer could have completely left out and the story wouldn’t really be any different. Except that we’d have enjoyed reading it more.

This happens when writers don’t have enough experience using the tools of the craft to know which is the right one. And yes, my 35,000 word false start happened for exactly this reason. After the fourth or fifth detour out of scene, which lasted for a good five or six pages each time, I finally gave up on writing and went back to what I should have been doing in the first place.

Learning to use the tools. Learning what they’re for, and making certain, as much as possible, that I was using the right tool for the job. I examined the telling passages I’d written on those detours and saw that I was doing a lot of world-building and justification for the scenes I’d started out writing.

It turned into the difference between saying this:

Emma put one foot into the cabin, then the other, and then she stopped. She looked at the pilot’s chair and remembered that day in February. The day she killed Archie Falco. It was horrible, but she had no choice. He’d slapped her, threatened to do worse, and was setting her and Brand up for a fall. He was on the radio talking to his pals in the mob when she came into the cabin behind him. That was the day that started this hellish adventure she and Mitchell Brand were on. Emma knew it was all behind her, but the memory threatened to overwhelm her. She shrugged it off then and sat down at the controls.

Emma stepped into the airship cabin and halted. She was unable to take her eyes off the pilot’s chair. Just months ago, Archie Falco had sat there, slumped forward into the messy stain that splashed across the window like an unholy halo. Emma could still feel the revolver’s weight in her grip as she moved into the cabin and then stepped forward to take a seat at the controls.

The first example tells (1) what actions the character takes (describing each step, then stopping), (2) what is being remembered, but not why (recapping details is often an attempt to explain the importance of what is being written – HINT: if you need to prove to yourself that what you are writing is good, it’s probably better to just scratch it out and start over), and (3) again, what actions the character takes.

The second example shows by describing (1) character action (word choice: halted vs. stopped), (2) a vivid memory (vivid details explain the importance of the descriptive text, and (3) character attitude/response to conditions.

Example 1 was fine for a first draft. It had the basics of the moment, but it lacked definition.

Example 2 takes the undefined moment and shaves off the rough surfaces until we can see the grain of the scene underneath.

Got a good telling example that you’ve refined into a showing moment? If not, what about a favorite showing moment from a story you’ve read? Please share below in the comments. Thanks!

I am a freelance editor and author of speculative fiction in the dark/weird vein. My editing style is best described as nurturing. I treat each customer with the same respect and consideration regardless of the quality of their writing, and always aim my comments at helping writers improve and strengthen their work. For more information, please visit me at my website.
View all posts by ajsikes →
This entry was posted in Around the Shop, Writing Craft and tagged cutterhead, jointer, planer, showing, telling, tools, woodworking, writing. Bookmark the permalink.